All About Horse Worship 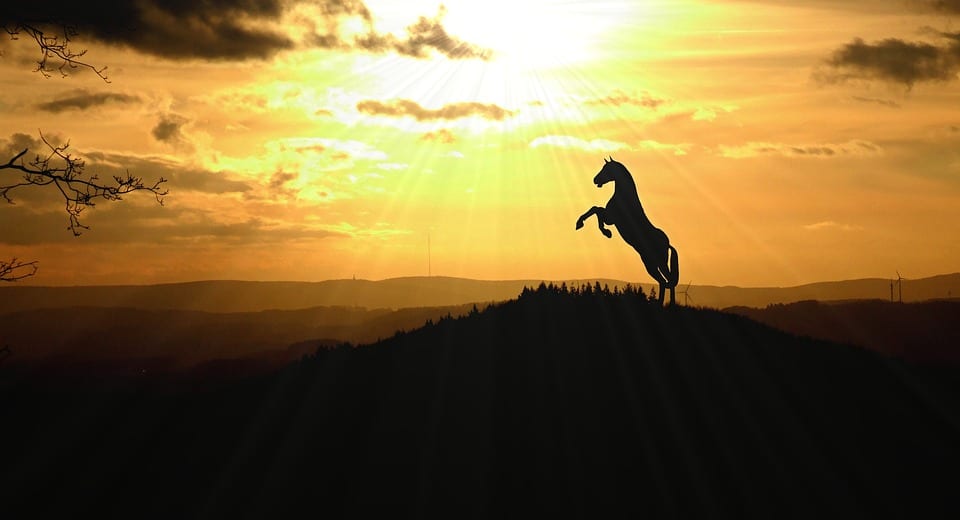 Each time the old year trots away, the new comes galloping in. As wishes surge, better times are hoped. If you appreciate Vedic imagery, the white steed of the Sun shows up on the New Year’s daybreak. As you inventively look at the horizon, several powerful milky-white steeds draw the Sun’s golden chariot — the one with just a single wheel carries Him at the speed of 364 leagues per wink.

The beauty and glory of the form of the divine horse is described wonderfully in the Hymn CLXIL of the Rig Veda.

In fact, it is entirely devoted to the ashva, or the divine horse, whose hoofs represent a winner — the auspicious reins guiding him are those that guard the Holy Law. It says, “Slight us not Varuna, Aryaman or Mitra, Indra, Ayu or the Maruts/When we declare among the congregation the virtues of a strong steed…” It also goes on to describe the horse as: “This steed that Yama [the Lord of Death] gave hath Trita [the Lord of the Sky and Waters] harnessed/And him, first Lord Indra [the King of Gods] had mounted/His bridle the gandharva [godlings] grasped, vasus [eight-storm gods] from out the Sun ye fashioned forth the courser/â€‹Yama art thou, Oh Horse, Thou are Aditya [the Sun], Trita art Thou by Secret Operation.”

In one of His avatars, Lord Vishnu is described as Hayagriva, or the graceful horse-necked One. In the Norse and the Germanic traditions too, the horse took the form of Sleipnir, the storm-wind, the vehicle of Odin, the Father of the Gods, the leader of souls. The horse was said to possess eight legs. The Vedic tradition, likewise, has ashtavasus, or the eight-storm gods connect to Vayu, the God of Air, but they also signify the Sun, Moon, the five elements, with Dhruva, the Pole Star, being the eighth representation.

In Indian mythology, a steed called Uchhaishrava, or the divine horse, that arose from the churning of the ocean by the gods and the rakshasas [demons], was taken into custody by the King of Gods, Indra. Uchhaisharava has several legendary attributes of his own. In a Nepali lore, it is believed that he mated with mortal mares and begot marvellous steeds of unrivalled swiftness. He was also said to bring the dead to life by just smelling them.

The aboriginal Indian Bhil tribals worshipped a deity called Ghoddev, a horse, the incarnation of god. Naturally, a rider who sat atop such a godly, graceful, powerful animal was not expected to be any less — for them, a horse-rider was someone endowed with divine status. The British, in order to crush the rebellion of these feisty people against them, exploited the belief. They sent in cavalry. The tribals hesitated to raise their arms against someone on a horseback; they were swiftly defeated.

In the Deccan, the horse was and is considered a lucky animal; the entry of a man on horseback into a sugarcane field during sowing season is believed to be auspicious. The Gonds, who are yet another aboriginal tribe of India, have a horse god in Kodapen, who they worship at the beginning of the monsoon, just outside of their village. They pray to a clay image of the horse and appeal to it to protect their oxen and cows. In some cultures, it is believed that the animal was able to scare spirits away.

Horses have been deified in many parts of the world. In the Japanese Shinto temples, a sacred horse was maintained. Roman historian Tacitus records that in some parts of Northern Europe snow-white horses were reared at a sacred grove and never used for riding. When the king, or the priest, yoked them to the sacred chariot, their neighing and snorting were carefully observed and the will of god inferred from it. Many cultures also believed that white horses knew the plans of the heavenly powers. The druids, as also the Persian magi, were said to practice divination by means of white horses.

Horses have been a part of literature, history, mythology, fairy tales and legends of the world. The Katha Sarit Sagar [An Ocean of Stories] compiled in 1070 AD by a Kashmiri Pandit, Sri Somdeva Bhatta, has a king addressing his faithful horse and praying for his help. The horse is described as being “White as the Moon; the sound of its neighing as musical as that of a clear conch, or other sweet-sounding instruments. It looked like the waves of the sea of milk surging on high, marked with curls on the neck and adorned with the crest-jewel, the bracelet and other signs, which seemed as if it had acquired by being born in the race of the gandharvas.”

The Song of Solomon says, “I have compared Thee, O my love to a company of horses [to my mare].”  A Slav fairy tale has a Prince called Slugobyl trying to win the hand of a princess by saving her father from enemies — with the help of a magic horse. Likewise, you have mice, turned into graceful white horses to be able to drive Cinderella’s couch to the king’s palace.

However, a horse, like our mind, is wild and moves around errantly, unless it is reined in. In Babylon, the horse was described as the God Zu; in gypsy language, ‘zi’ means mind. For Plato, a horse signified “Reason and opinion coursing about through natural things” and also “a confused fantasy.”

Explains Harold Bailey in The Lost Language of Symbolism, “Even in ancient Greece, the significance of a horse was an ‘intellectual principle.’” This is why while describing the Sun, the God of Wisdom and Intelligence, one attributes to Him a chariot and fiery horses. Even the sea, which signified the sciences in general, has allotted horses to Him. This is also why when the ancients described the birth of the sciences, from the intellectual principle, they thought of a flying horse, with its hoof bursting ajar the fountain — where they were virgins — in other words, the sciences.

Nothing else signifies the Trojan horse better than artful contrivance — the understanding to destroy walls. In an age when the intellectual principle was a custom received from the ancients, it was usually described as Pegasus, or the flying horse, with erudition by the fountain. However, not all of us know that the horse, in a mystical sense, signifies our understanding, while the fountain signifies truth. Yes, judges were, or are, known to wear horse-hair wigs. It’s believed to endow its wearer divine wisdom and discernment.

The thought of horse ‘as the mind’ highlighted the concept of horse sacrifice, or ashvamedha, in India. If a horse was deified, then what was the logic behind sacrificing it? It was believed that the mind-horse had three legs, representing the three lower planes; this was the horse of ahankara, or egotism, that strode around at will on them. It also viciously kicked the rider and others. Such a horse was best sacrificed to the Supreme Being. The sacrifice, of course, was the surrender of the horse of mind, not the real animal. It implied mindful control of the lower mind and attainment of knowledge.

Horses have always been trusted livestock in every culture. From Achilles’ faithful steeds, Xanthos and Balios, to the legendary warrior king Maharana Pratap’s Chetak, all societies have had enormous affection for this beautiful animal. For many of us, a white horse, the symbol of innocence, when equipped with a horn of pure intellect, became the unicorn. This is reason why the horn of intellect is supposedly keyed to guarding, or defending, truth.

In a world that is increasingly looking at truth as a mythical, fantasy-divined pre-eminence, the taming of the ashva of our horse-mind, therefore, is all the more imperative.