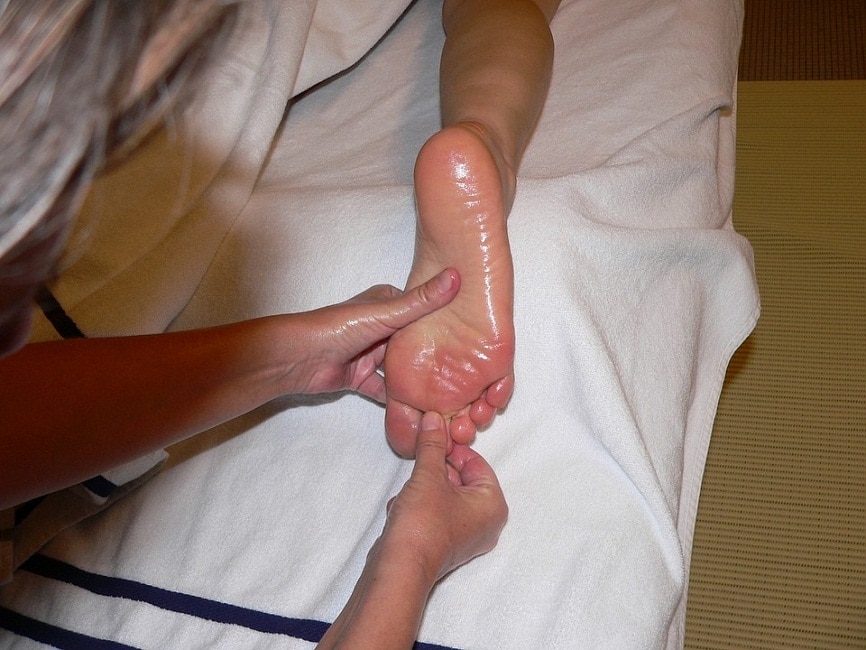 Reflexology is as old as the hills. And, it works.

Yet, if ever there’s a paradox by way of the usage of a word, here it is. Reflexology has got nothing to do with reflexes. Rather, the idea of the healing method is related to hands and feet.

Reflexology is based on an ancient theory that the feet ‘reflect’ our body. Though the method has been practiced in China, Japan, Egypt and India, for over 5,000 years, its theory, however, is nothing new. Only its current popularity — especially, in the West — is.

In terms of scientific analogy, reflexology has really come a long way since Dr Edwin Bowers and Dr Bill Fitzgerald published their landmark book on the subject, Zone Therapy, over a hundred years ago.

Reflexology, or zone therapy, as it was called earlier, uses pressure and massage techniques on what are ‘deciphered’ as reflex points of the feet and hands. This gentle form of alternative therapy is believed to alleviate ‘blocks’ that cause pain, tension, even disability, so as to promote our body mechanisms to return to a positive state of optimum health — or, restoration — and, not just recovery of health.

Reflexology has been found to be effective in a host of ailments — from asthma, arthritis, spinal meningitis, migraine headaches, sinus affections, back and menstrual anomalies to commonplace eye problems, including glaucoma. What is relatively less known is that reflexology can be extremely effective in stress, tension, tiredness and diabetes. This is not all: like acupuncture, it can also be used as a dependable adjunct in preventative medicine.

Reflexology points are found on the soles of the feet, or the palm of the hands. The points, in essence, act as small mirrors that reflect the whole organism. By using specific pressure techniques, certain ‘blockages’ that affect health can be detected through the experience of pain, or through the presence of ‘sugar grain-like areas,’ often referred to as crystal deposits. These occur in the part of the foot or hand that relates to the part of the body that is imbalanced.

Needless to say, like most systems of alternative medicine, reflexology promotes self-healing of the body from within, without any invasive form of therapy. It does this through the stimulation of the circulatory and lymphatic systems and by encouraging the release of toxins and flushing them out of the body.

A typical reflexology sitting is devoid of expensive gadgets, or high-tech instruments. All that a patient needs to do is to sit back and unwind. The therapist rotates the patient’s feet, which are allowed to dangle from the edge of a footrest. Next, the therapist kneads, presses, and pokes the soles. Reason: every organ and bone system has terminating points in the feet. This can be stimulated to improve health and functioning of a particular system.

Reflexology is a give-and-receive approach, where energy is transmitted to the patient through the hands of the therapist, for health information to be ‘tapped’ from the patient’s feet.

As the reflexologist uses what is termed as ‘caterpillar movements’ — which alternate the pressure of their fingers as one travels along the foot – one feels as if there are sugar grains beneath your skin. These points are, in their totality, crystallised toxins, as referred to before — or, potential trouble spots. As the therapist massages the crystals, the toxins get scattered and are in due course flushed out of the body.

A smooth surface is most welcome for the reflexologist. But, what if you have corns? Don’t you worry. Corns may, indeed, aid the reflexologist in diagnosing a problem. However, most reflexologists avoid treating patients with foot ulcers, swollen, tender veins in their feet, and pregnant women with a bad obstetric record.

With infants and children, there should be no problem whatsoever, or so long as gentle pressure is applied.

All the same, it is always good to supply the reflexologist with your medical history, including any other condition for which you are undergoing traditional or conventional therapy.

However, it must be remembered that reflexology is no panacea.

That reflexology works best in chronic ailments and relieves stress is well documented. What’s more, several physicians in conventional medicine do not think of reflexology as mumbo-jumbo. They value the benefits of the system, and are willing to attribute its success on a broad scientific plank — that the human body often responds to stimuli, be it heat, or chemicals in the form of drugs, or the physical stimulus of pressure, which have the wherewithal to propel the body mechanisms — to react in a certain way.

Reflexology is safe. There aren’t any side-effects, aside from relatively mild, temporary phases of tingling, pinpricks, or a burning sensation in the corresponding body part, following a sitting. One common side-effect is thirst, and an urge to urinate or pass stools. There could also be a general, but transitory, feeling of lethargy following a session.

To treat a health condition effectively, a reflexologist may advice anything between four and six sessions, each session lasting 40-50 minutes.

It may also be mentioned that some reflexologists use acupuncture meridians to elicit a greater insight into the patient’s health. Others use yoga and colour therapy. Proponents of the latter contend that the object of their fascinating incursion is an activity of great beauty and power: because, the healing colours of the universe flow through the sensitised body and hands of the therapist, and are projected on to the reflex zones of the patient’s feet.

You guessed it right. The feet, reflexologists contend, are the microcosm of the whole body, the common factor of unity, and the sum total of everything — including the soul.

They hold the mirror to your health.

← Just ‘Can’ Be Without the Other Beyond The Cosmic Sutra →