The Physics & Biophysics Of Sound ‘Healing’ 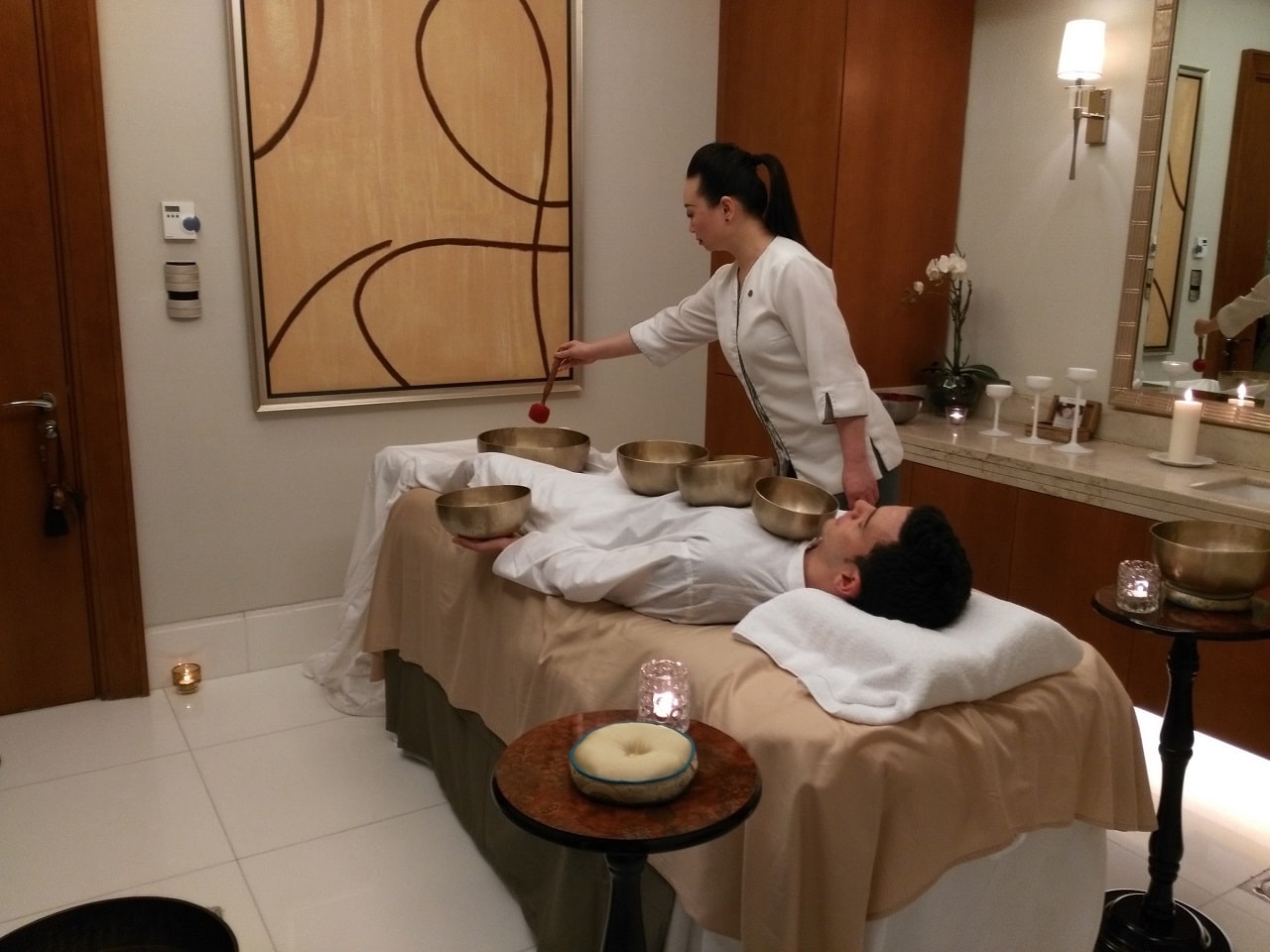 The fashionable intelligence at The New York Times has declared sound baths are everywhere, and it’s true. Well-educated people like myself now routinely spend a couple dozen dollars for a few hours in a quiet room listening to ringing gongs, thrumming bowls and shaking rattles.

Those special-purpose sonic environments are technically called ‘sound baths,’ but both aspiration and experience prefer the colloquial term ‘sound healing.’ Sound baths do, in fact, make one feel ‘healed’ just like a good massage does.

I’m fascinated by sound baths not just for the quiet, subtle thrills that pure tones give to any breathing human. As a neuroscientist and biophysicist, I spent my career understanding the mathematical theory of how fluid brains interact with vibrating bodies, with the most relevant discoveries published in three research papers [see here, here and here]. It turns out that coherent sound patterns can help nervous systems ‘tune’ themselves, in the same general way tuning-forks help experts tune pianos or harps. A few months ago, I validated that explanation in person with Aurelio, the man who founded the world’s most prestigious sound-bath workshop called Svaram in Auroville, India. Aurelio and I agree on how sonic waves heal human bodies.

That insight matters, because sound baths — like many ‘alternative’ therapies that use live humans — have amazing cost/benefit ratios, delivering happiness fast and cheap. Yet such therapies get short shrift in monetized media, precisely because they have so little profit and centralized messaging. The NYT article, for example, gave lots of examples and quotes, but didn’t distinguish between practices or explain why they work.

Fortunately, that article’s one scientific quote says all we need. David Baguley, a professor of hearing sciences at the University of Nottingham, said: “We know that sound has a massive influence on how the brain is organized.” Of course! The whole body from ears to toes is just a collection of vibrations, so it’s practically made of sound. Understand sound, you understand us.

Think of all the motions a human body can have, from big and slow to small and fast. The biggest, slowest motions are the strides and arm swings of locomotion, followed by faster and more delicate motions of fingers, toes and face. Keep going into the muscular tremors of the body [lasting around 0.03 seconds] and of the eyeball [0.01 seconds], through audible sound waves [down to 0.0001 seconds], into the ultrasonic realms of sound localization and proprioception [under 0.00001 seconds].

Those vibrations span factors of millions in time, with the highest-bandwidth, most information-dense signals at the microtime end. Those ultrasound echoes enable the brain to convert time into space, microseconds into millimeters, both inside and outside the body. Those neuromechanical vibrations make your image of yourself and your world.

Every last one of those body motions, from seconds to microseconds, is a kind of vibration and thus a kind of sound. You could say that a brain’s primary task, even the ‘visual’ task of vibrating the eyeball, is that of anticipating and re-creating vibrations in space. Our brilliant brains are jelly managers.

That means the whole brain/body system reduces, in a physicist’s sense of ‘first approximation,’ to a kind of self-playing instrument. Say a ‘smart’ harp with a million strings, one string for each muscle fiber.

In this metaphor, the harpist brain sends pulses [action potentials] to “pluck” muscle fibers at precise, predetermined times. Right after, the plucks’ micro-reverberations trigger a coherent wave of sensory-neuron pulses back up to the brain. By learning to arrange the outputs and inputs to overlap, the brain minutely sculpts muscle and myofascial vibrations in the body, making them as predictable and lingering as possible. But you couldn’t possibly be aware of those tiny vibrations because they are far too numerous, fast and subtle to be tracked by clunky ‘consciousness.’ They are as unconscious as can be.

Back in paleo times, our nervous systems calibrated themselves just fine for a few million years, because the outdoor sonic environment we evolved for was simple, natural and three-dimensional: wind sounds, rain sounds, twig-snaps, people.  Every sound a real one, every microsecond perfectly in place.

In the neuromechanical view, trees provide naturally complex sound-reflection surfaces, and their rustling leaves provide coherent sonic point-sources, distributed through space. Full-spectrum authentic 3D sound. Sitting under a Bodhi tree in Auroville, I could hear the shape of the moving wind in the rustling leaves. Perhaps that same sound pattern enlightened the Buddha.

Human-made sound baths, on the other hand, use two opposite types of sound to recalibrate the supine recipients in two opposite ways. To recalibrate one’s spatial-localization sense — hearing exactly where a sound comes from — there are rattles, rainsticks, chimes and other objects that make sharp, sudden clicks or dings from specific points in space. These constitute what physicists call ‘point sources,’ a kind of test pattern originating from exact points in space and time. [The Amazonian ayahuasca ceremony, a kind of drug-enhanced sound healing, ends with rattles shaken over the participants].

To recalibrate whole-body vibrations, sound baths also include things that ring continuously from being rubbed on the rim, the way one rings a wineglass. Brass Tibetan “singing” bowls and huge cylindrical quartz bowls both create enduring single-frequency notes, which typically form standing waves in the room. Standing waves have the simplest possible pattern in space and time, and so they provide the entire body with simultaneous, consistent, coherent stimulation. Sensory neurons on and under the skin thus all fire in microsecond synchrony.

Furthermore, the nature of standing waves, like those in microwave ovens, is to have ‘hot’ and ‘cold’ spots. That means you can feel the center of sound coming from within your head and feel it move around inside.

Other sound experiences, such as traditional religious ceremonies, include blown instruments, whose sounds are less pure, but thereby also embed vibrations from the performer’s abdomen. For example, the Tibetan horn, the didgeridoo or the Jewish shofar.

Some experiences involve the sonic properties of the space itself, such as reverberation patterns in a cathedral [e.g., the Caveau Phonocamptique], or the echo-enhancing meditation space in Auroville’s Matrimandir.  These point to the final benefit of sound baths: they’re social. A group of people in a quiet room automatically bathe one another in a soup of imperceptible human-generated vibrations, reference signals as useful as sounds from bowls and rattles. We can “heal” each other just by breathing.

So understanding our brains as vibration managers easily de-calibrated by modern life shows us what to avoid and what to do. Any self-learning processor needs to avoid artificial and artificially interesting signals, so tech-made sounds and fractured soundscapes in and of themselves de-calibrate nervous systems. Fortunately, that same processor can recalibrate itself with simple sounds from solid objects, one of the cheapest and safest ways to make the nervous system sing again.

William Softky is a biophysicist. He was among the first neuroscientists to understand microtiming, as also the technologists to build that understanding into algorithms. Thousands have cited his scientific work. Softky holds a PhD in Theoretical Physics from Caltech. His name is on ten patents, while two of the companies he inspired were acquired for US$160 million.